News
You are here: Home / News / News / Project News / “We Were Surprised to See How Much Water Levels Had Changed in Just...

Ecologist with the Romanian Ornithological Society, Kinga Cîmpan shares her experiences of organising and taking part in the Scent citizen science pilot campaigns on the Danube Delta in Romania.

The Scent Project conducted four pilot campaigns in 2018 – two on the Danube Delta in Romania and two along the Kifisos Basin in Attica, Greece.

Over 80 volunteers took part in the Romanian campaigns, making it one of the biggest citizen science events to ever take place in the country.

The volunteers came from universities, businesses and other organisations in the local community, and for many, it was their first time to participate in a citizen science campaign.

Tell us about your organisation?

The Romanian Ornithological Society (SOR) is Romania’s largest wildlife conservation charity aiming to conserve and study wild bird species, their habitats and sites in Romania. We strive to increase people’s awareness of environmental sustainability and we work to protect biodiversity and bird fauna.

Why did you decide to conduct the pilot campaigns in the Danube Delta?

The Danube Delta stretches over 580,000 hectares making it the latest wetland in Europe. It is home to more than 6,000 species of flora and fauna and has the highest concentration of bird colonies in Europe.

But these birds are losing a lot of habitat space in the Danube Delta because of human interventions, such as damming and draining large areas for agricultural use and intensive forestry. We believe that these changes to the landscape could create big problems overtime.

But these problems can be avoided if we gather enough information to identify and stop them before they cause detrimental effects to communities, ecosystems and environmental sustainability.

We also chose the Danube Delta because there is currently no up-to-date land cover/land use data available on this rural environment, to allow us to monitor these changes on a frequent basis and with high spatial resolution.

Which Scent apps did you test and what did you find?

The Danube Delta campaigns focused on gathering data on land use and land cover. The volunteers used the Scent Explore app and subsequently gathered lots of data – over 7,000 images to be precise.
We had 8 – 10 volunteers out on the river, in a small boat from 10am until 5pm, travelling around the river, playing the game and taking lots of pictures. The first campaign took place in August. The second one was at the end of September.

What impact would that have on the environment?

Fish cannot live in such shallow water. This is then a problem for fishermen and then for the birds too. This is why citizen science and the Scent Apps are so important. I think it is important for citizens to know and be aware of what is going on in their environment because ultimately, they are the people who will be most impacted by any changes.

But it is also beneficial for policy makers, local authorities and other interested organisations to use this data. Many areas we analysed along the Danube Delta are not available on any flood risk maps, so these technologies are very useful. 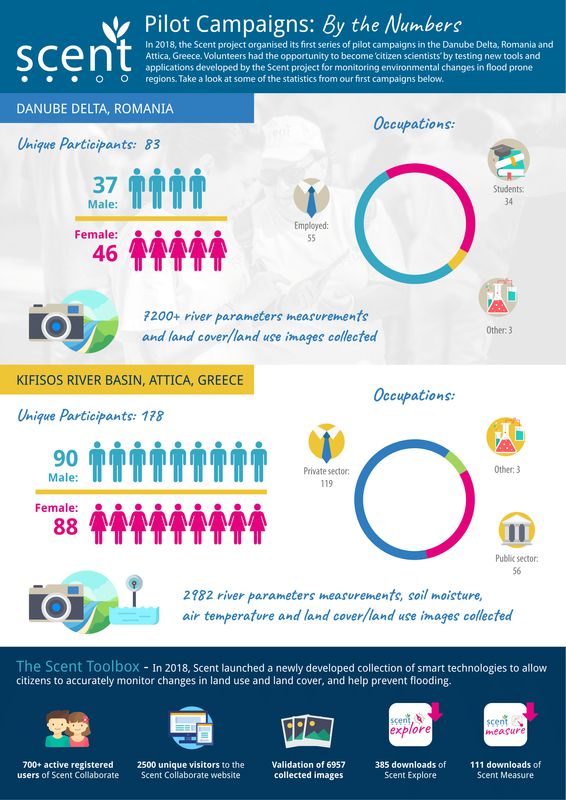 If you would like to take part in our next pilot campaign in the Danube Delta, email hello@scent-project.eu

Save the Date for the Scent Showcase

Take Part in the Scent Appathon
Scroll to top